​"This was Roger’s real inheritance, not just land and castles but the tradition of royal service and military victory, the will to win glory and a physical and mental aptitude for war. And yet it was more than this too, for medieval family traditions were not static, unchanging tales of the past but growing, changing concepts. Many of the family stories with which Roger was familiar linked his family’s history with its destiny. Such stories had a life of their own. For example, Roger’s descent from Llywelyn the Great and the ancient Princes of Wales carried with it a legendary descent from King Arthur. One of the popular ‘prophecies of Merlin’ recited throughout England and Wales at the time was that a descendant of this line would become King of England. ‘When English money is made round, a Welsh prince in London shall be crowned.’ This story was enlarged upon and commemorated by Roger’s grandfather, who had held a great Round Table tournament at Kenilworth in 1279. Kenilworth had been the great castle of de Montfort, and thus Lord Mortimer had held his last great tournament in the castle of his vanquished enemy. King Edward and Queen Eleanor had both attended, confirming the old knight’s greatness, and providing the royal presence necessary for a tournament to be referred to as a ‘Round Table’, in emulation of the court of King Arthur. But the real significance of the event was to remind everyone of the Mortimer’s Arthurian ancestry. Roger was not just descended from glorious warriors, he was part of a living and growing tradition. One day one of his kin would rule all England and Wales."

Roger Mortimer was born in the year 1287 on April 25, the feast of St. Mark, a day of bad omen. He shared this birthday with Edward II, and, being three years Edward's younger, he was well aware of the dark prophecies made about Edward due to his birth date.

At 14 and a half Roger was betrothed to Joan of Geneville, an older woman at 15 and a half. The marriage would have been consummated immediately. They had two children within three years. 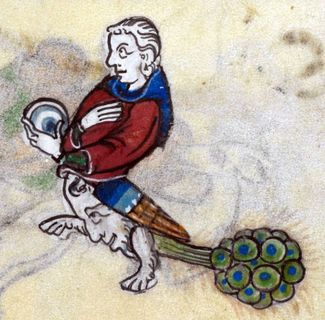 
​Fun fact: Roger Mortimer really liked Peacocks
At the age of sixteen, Roger Mortimer was likely a member of Prince Edward (later King Edward II)'s court, one of the youths who played dice, watched jousts, and "brightened up a somewhat stuffy court"

At the age of seventeen Roger's father Edmund died in a skirmish, and Roger Mortimer became the head of the household, and Earl of March and Ulster. Additionally, due to his father's death Roger was relegated to the crown and finished his education in the king's house alongside Edward II and Piers Gaveston.

Over the course of their marriage, Roger and his wife had at least 12 children, implying a satisfactory marriage. "in order to remain regularly pregnant by her husband, Joan would have needed frequently to travel with Roger when he was summoned to attend Parliament, or to attend the king, only remaining behind in times of actual combat."

About three weeks before his nineteenth birthday Roger was given full possession of the estates inherited from his father, held directly from the king. On that day, he became Lord Mortimer of Wigmore and inherited the barony of Wigmore, with its castles, manors, towns, and estates, as well as hundreds of manors and estates across multiple countries in the area.

Later that year, he was knighted by Prince Edward (II), "In Roger Mortimer he knighted the man who, in more than twenty years' time, would force him to abdicate."

Though the king had ordered the knights to stay loyal to the army, twenty two men deserted, including Mortimer and Gaveston. All twenty two men were arrested and declared traitors by the king and were stripped of their titles and land. The men went to Prince Edward (II) to ask him to intercede. The prince spoke to his stepmother, Queen Margaret, and was largely successful. For the majority of the men, including Mortimer, the titles and land were restored. Among those who were not forgiven, however, was Piers Gaveston. ​

In July of 1307, King Edward I took his final breath, placing power in the hands of Edward II, who would immediately take over as king.

When Edward left to marry Princess Isabella in France in January of 1308, he named Gaveston sole Regent of England for the two weeks until he returned. Angry and concerned for the Crown, the Earls of Lincoln, Surrey, Pembroke, and Hereford, along with the Bishop of Durham and five barons, decided that their loyalty lay with the Crown, not the king, and that if the king were to act in a way that they felt was against the nation they would have to correct him by force. Mortimer, however, did not sign the declaration that the Earls and Bishop had drawn up. This may have been due to his friendship with Edward and Gaveston, or it may have been from a place of personal ambition. With the king out of the way, other members of court would be put in more power, but he would not himself be helped. It was better for him, politically and personally, to remain on the side of the king... at least for now.

Many years later, in 1317, after a few wars were fought, King Edward made Roger Mortimer Lord-Justice of Ireland, "so important a Trust at the time that it shows he was far advanced in the King's favour."

By 1320, Roger Mortimer had made many alliances. he had increased his fortune, and he was quite powerful, being "look'd on as one of the Principal Barons. As such he was courted to joyn with those Lords, who oppos'd the Arbitrary Government of King Edward, and his new minion, Hugh Spencer the Younger: Occasion of Quarrel was easily taken, where so little caution was observed in giving it."

The rift between Spencer and Mortimer grew ever wider when Spencer bought land out from under the Lords with whom Mortimer was aligned. When these Lords banded together in a Confederacy against Spencer and his father, Spencer responded by trying to take more land by force.
Fun Fact:
​Queen Isabella keeps a chamber at Westminster Palace for him, in the Privy Palace where the king was meant to spend time with family and favorites

Roger Mortimer is hanged at the gallows at Tyburn in London in 1330. His naked body is left on the gallows for two days.